Could there be anymore money printing?

Could there be anymore money printing?

Before you go smashing the exit button, hear me out, OK? I know we have all been bombarded throughout the past couple of months with articles about economy and corona related projections (death tolls, crumbling markets, frequency of touching one’s face – you name it). Well thanks to these flashy articles, Instagram influencers & ඡ්‍යෝතිෂය වෙදීන් we now have more Covid-19 experts in Sri Lanka than Covid-19 patients worldwide.

Part 1 – Based on the very extensive survey I did with the large sample size of 5 of my friends, part one covers what a recession is and what is leading us into a recession.

Part 2 – What is the solution? A simplified explanation of modern monetary theory and the rationales for and against money printing central banks around the world.

Part 3 – No there is no part 3. Decided it was a bad idea after watching Hangover and Spiderman. Part 3? No thanks.

I have tried to keep this article brief, with no numbers and with a little bit of humor, because let’s be honest most of us would rather scroll pages and double tap to like than read articles. Otherwise, to keep things interesting you can try imagining Morgan Freeman narrating this article. Whatever that works for you.

What is a recession?

Recession by textbook definition is a significant decline in general economic activity of a country over a sustained period, usually 2 quarters. In other words, it is a decline in the total amount of goods and services produced by a country. Still confusing?

Imagine if Sri Lanka’s economy produces ONLY kokkis and nothing else, then during a recession this is how Sri Lanka’s production of kokkis would look like each quarter. 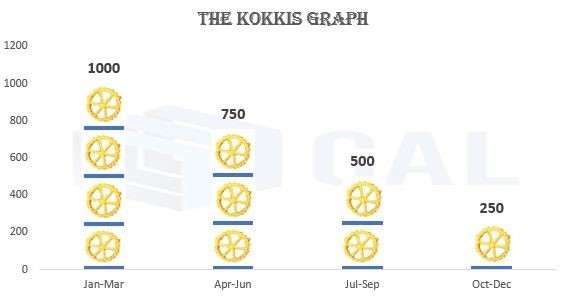 Since we are talking about graphs, can you help Dora?

Back to the story on kokkis, why didn’t we produce the same amount of kokkis like we used to? Is it because we Sri Lankans suddenly became health conscious? Lol no.

The production of kokkis declined mainly due to the following reasons,

Kokkis is equivalent to Sri Lanka’s GDP. The producers of kokkis are equivalent to anyone producing goods or providing a service in our economy. It can be a hairdresser, an apparel company, e-commerce company (which may or may not have sold salmon tins priced in dollars), tire manufacturing company (The ones that සහොදරයාs throw around in Sri Lankan universities) etc. All these businesses create value to the Sri Lankan economy by producing goods and services. Right now, we are facing situation number 2. Now you get the big picture, right?

Is Sri Lanka headed towards a recession?

Ask yourself the following questions,

By any chance if your answers are YES to the above questions you should be talking to our stock brokers about investing in the stock market, or just talk to us anyway. We have a lot of interesting insights. Like Charlie Puth said, we are just one call away. (https://www.facebook.com/calinsights/)

If your answers are NO that is referred to as significant fall in consumer demand and business confidence. These could lead us into to a recession. Now since all of you know what a recession is and what leads us into a recession, let’s look at what the central banks around the world are doing to deal with recession.

Advocated by the likes of Warren Mosler, MMT states that any country issuing its own currency does not face any constraint in budgetary financing as a country cannot run out of money (Because they print their own money).

In simple words, MMT states the government can spend as much as it wants because the central bank can print money as much as the government requires. (I’m sure some of you are laughing thinking even before Covid-19 we were anyway printing money, yes but this time with an excuse) 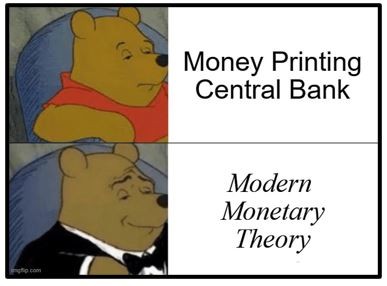 MMT’s key policy goal is full employment (For the government to spend as much as required for the economy to produce the maximum goods and services it has the potential to produce). MMT also calls for government spending on job creation without worrying about fiscal deficits. When inflation starts picking up, MMT calls to use taxes as a policy tools to drain the money out of the system.

MMT backing, particularly in the political sphere, is often driven by Utopian thinking (Politicians who promise to change the real world into a perfect Disney World). Politicians such as Bernie Sanders and Alexandria Cortez those who promote massive unaffordable public spending programs are driven by the ideas of MMT. 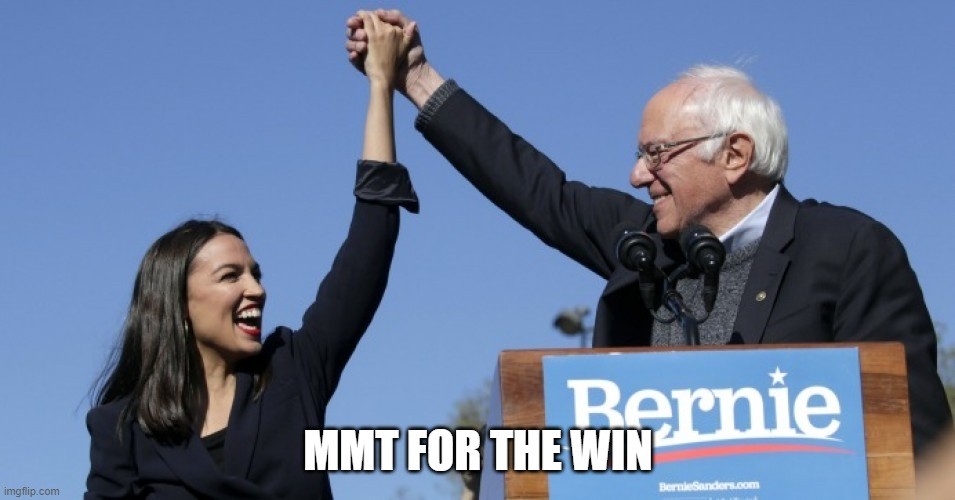 There are range of arguments opposing MMT, few relevant ones as follows,

I am still a bit skeptical about a complete adoption of MMT in Sri Lanka (if it ever gets to that point). You know why? It is what uncle Ben told Peter Parker, 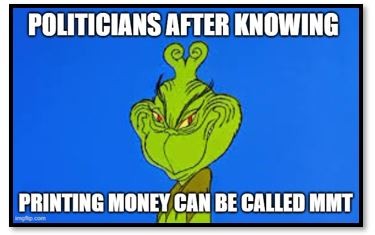 As Covid-19 pushes the world economy into a recession, key developed markets on top of their massive monetary easing measures are throwing additional fiscal spending between 5 percent to 20 percent of their GDP. Even though most countries do not label these measures and stimulus packages as MMT (mainly due to the criticisms of mainstream economists) it is remarkably similar to the ideas advocated by MMT. (அண்ணே பூவ பூனும் சொல்லலாம் புய்ப்பம் னும் சொல்லலாம்)

Starting from 2018 CBSL has taken necessary policy measures to maintain a low interest rate environment so that consumers and businesses would borrow, and kick start the growth story. If CBSL crowds out the domestic funding sources now it would increase market interest rates and prove their past policy measures futile.

Given the current high interest rate environment for emerging market debt it would not be wise for us to raise dollar debt outside Sri Lanka, but concessionary loans and grants are a possible alternative. Then what are the options we are left with? to cut down expenditure or to print.

We started with a weaker economy than we cared to admit, even before the Covid-19 crisis hit us. Growth was below subpar levels. If conventional policy measures alone were enough, we should have started to see credit or GDP growth pick up after significant policy easing measures during the last few quarters. The low consumer spending, subdued demand and business confidence which already existed pre Covid-19 is likely to worsen in upcoming months. 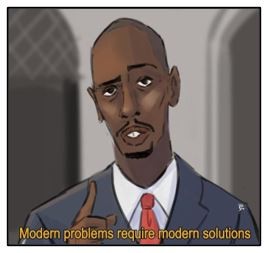 Therefore, to keep the unemployment levels low and avoid going into a deflationary situation conventional policy measures might not be enough. We need something different.

Using an analogy all of us would understand, if shot selections of Kusal Mendis were bad during tours of Ireland, Zimbabwe or Afghanistan would we want Kusal Mendis playing the same shots when we tour much stronger Australia or England? (If someone is saying yes, it is probably Kusal Mendis).

Fall in consumer confidence, declining business revenues, rise in unemployment and possible deflation are unavoidable and are components of any recession. Historically recessions have lasted from a matter of few quarters to decades turning into depression. But the silver lining is there are more tools available than during The Great Depression, The Great Recession, or the more recent Global Financial Crisis, and many of these tools were created in response to these dark times. MMT is just a theory surrounding few of those tools. The spending by the government right now is crucial not just to stave off an economic crisis but a humanitarian crisis as well.

I understand these are uncertain times. There are enough and more projections about anything and everything on the web lately. The problem with comprehension is, it often comes too late. But if last few decades of history have taught us anything it is that we Sri Lankans have always been resilient. Through right or wrong policy decisions we have always gotten through crises in the past one way or the other. I am in no doubt the history will repeat itself this time as well. We shall overcome. Stay safe everyone!